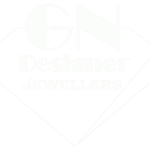 Our multi-stone rings are delicately inlaid with diamonds or a cluster of diamonds or gemstones of your choice. At GN Designer Jewellers in Melbourne, you can, of course, design an original ring, or choose from our extensive range.

Multi-stone rings allow several decorative stones to be included in the ring design to emphasise the central stone. There is also the option of creating a cluster of smaller stones.

Once you have found the right person, a new search begins, finding the right ring. A multi-stone engagement ring can be a perfect choice, and a ring with three stones signifies the past, present and future. Telling the story of your journey together, the present, and thus the presentation of the ring, the gift, is showcased in the centre, generally the larger stone of the three. The smaller stones on either side, represent the past and future, supporting and embellishing the middle stone. This trilogy setting can equally be seen as those crucial factors: love, friendship and fidelity.

You can opt for different sizes, same sized diamonds or with a graduation of size or carat. You can also choose a combination of stone, to tell more of a story, so precious gemstones that hold personal significance can be used instead of diamonds. You can select a favoredcolor, or you have the option of using you and your partner’s birthstones on the outer of the diamond. With colored stone rings, the use of gemstones can allow for a smaller price tag on the ring with no impact on its significance or beauty.

There are many options for colored stone rings. Listed here are the 12 birthstones, listed by month, though each holds different traditional significance so are not limited to be used as birthstones. Whether you like the color or the meaning they hold, any precious jewels can be incorporated into your engagement ring.

The garnet is available in many colors, and the tone is generally associated with where they were sourced. The legend of garnet states that it lights up the night and offers protection from nightmares. Long been carried by travelers, garnets are said to protect against any accidents happening far from home.

From ancient Greek and Roman tradition, amethysts were said to keep the wearer quick-witted and clear-headed. Purple in color, amethysts are widely available in different shapes and sizes and can compliment both cool and warm tones, so settings in any metal look great for your colored stone rings. It is a beautiful, versatile and affordable stone.

Its name meaning seawater, the aquamarine beautifully symbolises the bright color and vastness of the ocean. This stone has long been a symbol of youth, health, fidelity and hope, the color of sea and sky, the aquamarine embodies eternal life. Traditionally aquamarine was said to have a soothing influence on couples which makes it a popular choice in engagement ring stores or a perfect anniversary gift.

Diamonds have always been thought of as objects of desire. It has often been believed that diamonds possess healing powers, and they have been regarded as the ultimate symbol of eternal love. We have pure and naturally colored diamond rings available.

The green emerald, the color of spring, represents love and rebirth. The emerald is the gem of Venus and is said to support fertility. Cleopatra was famous for wearing emeralds, and Ancient Egyptian mummies were often buried with an emerald on their necks to symbolise eternal youth. Emeralds are one of the rarest of gems and almost always found with inclusions, or birthmarks, but these inclusions are expected and do not detract from the value of the stone as much as with other gemstones.

Pearls have always been admired, in some cases worshipped. In Persian mythology, they were thought to be tears of the gods. An Ancient Chinese legend claims that the moon holds the power to create pearls, and infuses them with mystery and its ethereal glow.

Pearls are unique due to them being the only gemstone to be formed within a living creature. Natural pearls are very rare and can be difficult to recover from the ocean’s depths. However, there is a technique of culturing pearls from molluscs carefully seeded by oyster farmers with irritants similar to those produced by nature. These cultured pearls can come in many colors: cream, white, rose, lilac, green, gold, grey, and black. Pearls are timeless and can complement any outfit.

Rubies represent love, passion, and courage. For centuries the ruby has been deemed the king of all gems, and it was understood that wearing a red ruby gave good fortune to its owner. Emperors and kings throughout history have prized rubies, and to this day rubies are the most valued gemstone and a very popular choice for colored stone rings.

Ancient Sanskrit writings refer to spinel as the daughter of ruby, often confused with ruby, due to the bright red color. Spinel is far rarer than the ruby though it can be found in enormous sizes. In addition to reds, spinel can be found in shades of orange, pink and purple. Spinel can come in beautiful blues, though these are extremely rare. The Spinel is believed to protect the owner from harm, soothe away sadness, and reconcile differences.

Sapphires hold a promise of honesty, purity, loyalty and trust, and thus are one of the most popular engagement ring stones. Sapphire is greek for blue, but they also come in almost every color of the rainbow and make perfect colored stone rings.

Tourmaline means mixed stone, and thus is available in a spectrum of colors and color combinations. Known for displaying multiple colors in one gemstone, tourmaline creates unique colored stone rings.

Topaz has a universal appeal because they come in all colors: yellow, brown, green, blue, red, pink or no color at all. The ancient Romans and Egyptians associated this golden gem with the sun god and believed it held power to protect, heal and dispel enchantments.

Thought to be one of the oldest known gemstones, turquoise has remained popular for centuries. Turquoise has long been attributed with promoting the wearer’s wealth and status, healing powers, protecting from evil and bringing good luck. Turquoise can contain narrow veins known as the matrix, or veins of color that form an intricate pattern, which are sometimes called a spider web.